This week I have been focusing on learning ProtoPie as a tool and prototyping different interactions as well as testing the limits of the tool. I have created a working tagging interaction – getting the variables right took a while, but I’m happy with the results. Due to time it takes to assemble the interaction, the user can now tag two circles per stage in the prototype, but ideally the user could add as many as tags they want. Unfortunately ProtoPie doesn’t support the use of a device’s native camera, so I won’t be able to use a live camera interaction and have to fake it instead. Additionally, I’m not able to record the user’s tagging choices on system memory, as this is only a prototype and not a real developed application. Luckily ProtoPie does support text input and a native keyboard, so I also created an interactive comment field.

I’m also thinking of including a detail that displays which prompt stage the photo was taken in for the process slider. For example, if the image was taken during a sketching stage, it would display “sketching” as a status. I’m also adding an importing option from digital drawing softwares as an addition to taking the photo, as digital drawing is a popular medium within my target group.

As my prototype features many different screens, I created a sheet to make it easier to manage and track the design and prototyping stage for each sceen. It has helped greatly with the project management. 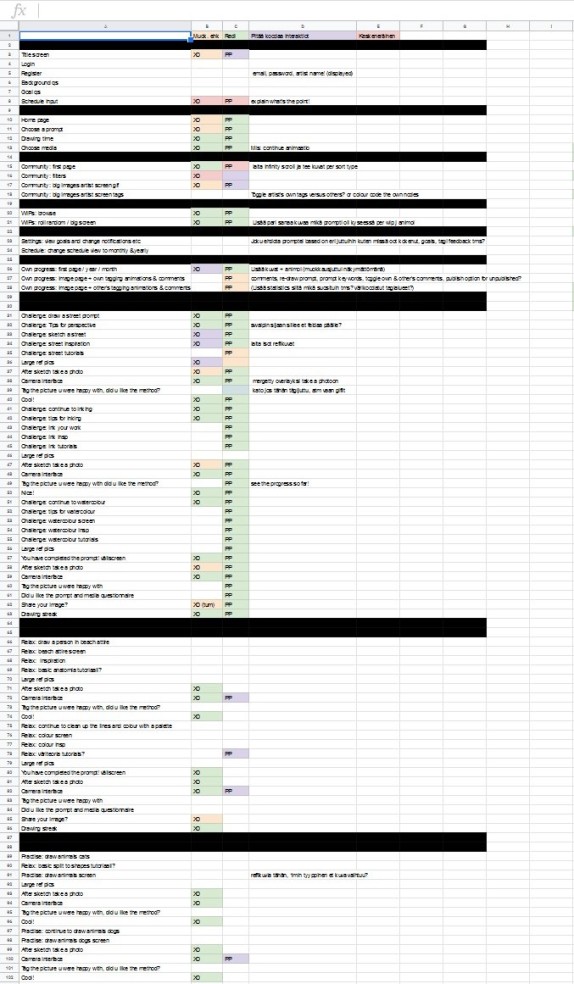